The Doctor of White Marble – a new exhibit in the Museum 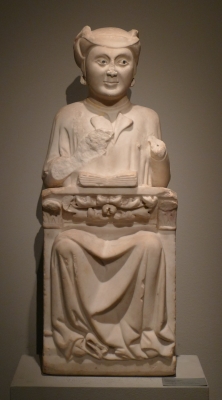 In September 2012 we received the information about an entrepreneur from Sweden who wanted to sponsor a new work of art for the JU Museum. The art historians from the Wawel Castle Museum were able to provide the necessary help, as they had just received the catalogue from the Brimo de Laroussilhe gallery – one of the best galleries worldwide, specializing in works of Medieval and Renaissance art, located at the Quai Voltaire in Paris. The position number 33 in this catalogue was a figure of doctor in the University of Bologna. We were aware that this would be the proper object worth of purchase, a precious addition to our collection and also a rarity for art collectors.

The sculpture is dated to ca. 1340, made of white marble, it has 70 cm height, 26,5 cm width and 11 cm depth. The choice was taken basing on its unique character, the historical and artistic value. This work of art, previously in possession of Artur Sambon, had formed a part of funeral sculptures of university professors, once created in Bologna (most of them are kept in the Museo Civico Medievale) in Bologna.

Most probably, it was a central part of composition on the broader side of a sarcophagus. On both sides of the sculpture, according to the repeated composition pattern, were figures of students listening to the lecture. They belong to the oldest sculpture scenes, presenting the daily teaching of scholars. One can also treat them as the earliest proofs of the high social prestige the doctors had. Such images found in the Bologna reliefs are the only of its type remaining in history of art.

This exhibit, now being property of the Jagiellonian University Museum, is stylistically comparable to another sculpture of a Bologna professor in the Cluny Museum in Paris. Both sculptures have a similar artistic character. The face, clothes, the whole composition may indicate that both were made by the same artisan's hand. They have common characteristics too, for example slightly rounded facial features, a cylindrical neck, identical shape of lip corners, lead pupils in the eyes, the acanthus leaf decoration under the lectern, or the identical arrangement of drapery folds in the lower part of the clothing. This work of art provides an example of high quality 14th Italian funeral sculpture, presenting its model in life-mode. Although the figure lacks some parts (both forearms are missing), it doesn't have a negative influence on its perception.

The image of the Bologna University doctor reminds us of the origins of European universities. Initially, a university was a voluntary, collective and uniform community, an autonomous corporation consisting of students alone, or scholars and teachers, based in one city and having its own rights – not an edifice with lecture rooms and own administration. Between 14th and 15th centuries most universities already had their seats, colleges, boarding houses and libraries. Their situation was stable now. Also the position of scholars became firmly grounded. First images of academic scholars began to appear in art. The oldest of them are the sculpture scenes from the Museo Civico Medievale in Bologna. The reliefs depicting genre scenes decorate sides of sarcophagi of doctors and date mainly to 14th century (the oldest of them being the sarcophagus of Odofredo, who died in 1265). The models are presented giving lectures. Those scenes are extremely interesting, rich in details of daily life. Typical examples are the sarcophagus of Luzio and Mondino de Liuzzi (1318), another of Bonandrea de Bonandrei (1333), Arca Giovanni D'Andrea (1348), the sarcophagus of Bonifacio Galluzzi (first half of 14th c.), Arca Bartolomeo da Saliceto (15th c.). The sarcophagi of professors in Bologna, as well as their mausolean tombs (le tombe), which are also to be found in Bologna, are often compared to royal mausolea due to their importance and grandiosity. There are 28 tombs remaining in Bologna, their iconography being the testimony of the artisans' profession. They are also symbols of the social class and its intellectual and economic potential: […] che dello Studio fece il perno della propria organizzazione economica e civile.

In the light of the remarks written above, the purchase of the sculpture to the Jagiellonian University Museum collection is an event of great importance. Historically, this sculpture is almost contemporary to the foundation of the Cracow University, which was established by King Kasimir the Great in 1364 and modeled on the University in Bologna. Academic relations between Bologna and Poland reach as far as the late 12th century. In 13th century the  Polish community already existed in that city. It is probable then, that some Polish students may have attended lectures held by the professor presented in the sculpture. Its subject makes the work of art a unique part of academic iconography and adds to the historical background of relations between the universities in Cracow and Bologna.