Exhibit of the Month 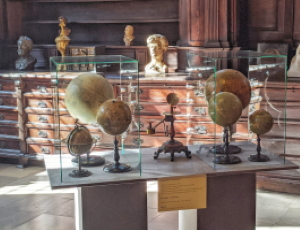 'Exhibit of the month' is a series initiated by the Jagiellonian University Museum with the beginning of the new academic year. Each month we will explain the Museum collection to you, choosing a single exhibit or a group of exhibits which usually are not shown to the open public. The item can be seen in the Collegium Maius Libraria after purchasing a ticket for the standing exhibition.

In September we entered the new school year and this week saw the inauguration of the 2020/2021 academic year. This is a good opportunity to look closer at educational aids. For the entire month of October, visitors will be able to see some of the first Polish-language globes made by the Czech company owned by Jan Felkl from Prague (later known as Jan Felkl and son, Roztoky near Prague). A true rarity among them is a celestial globe which Polish version existed in a single unit only. At the same time, it is the oldest know Polish-language celestial globe.

The company was established in 1852 and survived until 1952, although it produced wares for Polish market only until 1914. After the First World War first Polish manufacturers emerged. It should be noted that this Czech company operating within Austria-Hungary offered wares for the almost non-existent Polish market. What is even more significant, they were usually sold in Galicia and Lodomeria.

The company produced a wide variety of globes, most often for educational purposes. Beside traditional school and student globes it also offered models made of two or four separate parts, allowing to present each hemisphere as separate, furthermore globes illuminated by tiny oil lamps, telluria, zenitharia, and planetaria. The company stayed in a long-term cooperation with Mirosław Suchacki, the designer of the original Polish stenography (which unfortunately failed to win popularity). Therefore, the Polish terminology is well-developed enough to recognise changes in Polish language occurring over several decades. The globes displayed in the Museum date to the period between 1866 and 1900.

While visiting the Museum, one should also take note of two other globes: the 'Gilded Jagiellonian Globe' displayed in the treasury and dating to ca. 1510, and the so-called Bylica Globe from 1490 to be found in the Copernicus Room. They represent the oldest Polish globes of their respective types and therefore fit perfectly into the oldest building belonging to the oldest university in Poland.