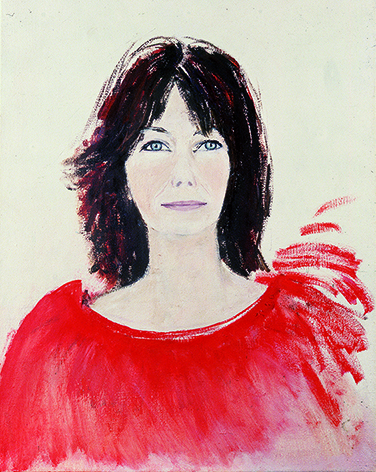 A few words from the catalogue introduction:

‘The exhibition of Izabela Chmielińska-Zbrożek's works  in the Collegium Maius cellars is a reminder of an artist who chose a difficult area of creation – portrait painting.

In all periods of history the human form was the most interesting subject for artists, shown in different perspectives, in different contexts, and although in modern times, especially in Dutch art, the portrait was placed at the end of the topic hierarchy, its popularity was to remain high. It would always find its enthusiasts, who requested portraits from painters, and at times they were eternized by the most distinguished artists, for an eternity so-called , and it  often was the case that they became generous patrons of the arts and artists. Similar things occurred in later periods too. In the exquisite art of portraits, all paintings play the same role – being a dialogue between the observer and the portrayed, and the development of this dialogue is influenced not only by the artist's skill, but also by the sensitivity of those observing.

Similarity is of utmost importance  in a portrait. Whoever commissions a portrait, will require physical and psychological correspondence, making the artist search for expression while depicting the model. The great masters, while producing commentaries on the question of similarity, knew how to use their talent and skill to bring out not only facial features, but also the very essence of the portrayed person.

It is the search for that essence which drives Ms. Izabela in her artistic work. When she becomes interested in a person, fascinated with the personality, she tries to capture their traits in an unrecognisable way. Her approaches makes one think about St. Veronica's handkerchief, hastily thrown to Christ to wipe off the sweat, which captured an image of His face. This is the origin of vera eikon – the true image. For me, portraits created by Ms. Izabela are such reflections, like a short moment, a momentary flash, when a person leaves their trace either on paper, or on canvas.

In our times few artists spend a lot of  time painting portraits. The unlimited ways of expression, perception, technical tricks, are the reason that this genre is seldom encountered in its pure form, in most cases it is a synthesis of different approaches. It should be noted, however, that it still remains one of the most difficult forms of expression. Ms. Izabela, over the long history of her activity, stays faithful to the art of portraying. What is more, in her works she clearly declares her liking for people, she tries to discover as many positive traits as it is possible, and she attempts to show them in the best way. Ms. Izabela stands on the bright side of life. Whole groups of wonderful girls, colorful Floras and angels playing music make her daily symphony, whose harmony brings joy to all who look at her paintings.'